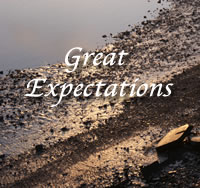 Riveting exposition by Mike Newell of this Dickens classic tale of rags to riches for Kent marshes, blacksmith's nephew Pip. The boy's story opens with a terrifying encounter with an escaped convict, followed by an unsettling one with the wealthy, unhinged Miss Haversham and her cute but cutting ward Estella.

Parented by abusive older sister and loving uncle, Pip is destined for apprenticeship at the forge. However when appropriated as a playmate for Estella, he is exposed to a more sophisticated lifestyle and is dazzled and seduced. His visits are terminated but some years later solicitor Jagger calls to tell him of his great expectations as a gentleman in London, thanks to the munificence of an unnamed benefactor. The adult Estella, stunning and cold, is fired into society from her guardian's lust for vengeance on all men but Pip loves what he believes her truly to be.

Gradually the story behind Miss Haversham's greying wedding dress, shuttered mansion and decaying wedding cake is narrated and the intertwined threads of the most important players in Pip's life revealed as the young man finds his way through extravagance and arrogance to value the love of his friends.

Dickens wrote more than one ending to the novel Great Expectations but the film chooses that which suggests a happy ending for the older and wiser couple.

The marshes star as beautiful and bleak; Dickensian London is authentically rendered in mud and grime. Dress and hairstyle are conscienciously observed with the young men experimenting with extremes of fashion. My movie buddy enjoyed the film but would have liked to have seen more of the attractive costumes of the period at more than the one party.

Holliday Grainger is simply dazzling as Estella, hinting at the heart beneath the cold stare and doll-like face. I'd have liked a more eye-candiful Pip but the less than perfect features remind us of the plebeian stock from which the character comes and which dogs his progress in fashionable life. Jeremy Irvine engages our sympathy as a floundering fish out of water, and contrives to keep it through Pip's obnoxious snobbery and out the other side.

Ralph Fiennes' Magwitch the convict is a pleasure to watch as a far cry from the suited, suave Mallory in Skyfall, and Jason Flemyng is believably loveable as Pip's uncle Joe Gargery who well deserves his own happy ending. Olly Alexander is charmingly likeable as Pip's loyal chum, Herbert Pocket. Sally Hawkins is a convincing termagant in the role of Pip's sister and Robbie Coltrane plays Jagger with unnervingly dead straightness. Helena Bonham Carter as Miss Haversham enjoyably reprises her role as Belladona Beatrix (Harry Potter) without the wand and the criminal record.

With a subtle supporting score, a well considered script and fine performances, Mike Newell's effort surely deserves acclaim. From beginning to end I was barely conscious of the cinema surroundings, being so completely drawn in by the story and involved with the characters.

It was perhaps unsurprising on a Saturday night when the twenties and teens are prepping for clubland that the demographic bias of the packed Screen 3 of the local Vue cinema was toward the retired, sprinkled with a few younger viewers and two actual children, with an overall 50/50 gender split.

You don't need to have read the book or seen the excellent 1948 version or any of the TV dramatisations, be either British or Dickensian, to thoroughly appreciate and enjoy this masterpiece of storytelling. Great Expectations is not a comedy but it does have one or two laughs, a few smiles, hopefulness and the realisation of good from bad, of redemption, of love and at least, engenders the appreciation of the nice cleaned, paved and tarmac'ed London that we now enjoy.