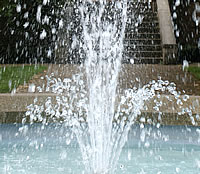 Hope Springs both eternal and in the small town that houses and supports Dr Feld's couples therapy practice. Neglected, lonely wife Kay, played by Meryl Streep, cracks open her nest egg for the $4k for herself and her grumpy, distant husband, Arnold, (Tommy Lee Jones), to spend a week there attempting to restore intimacy to their past sell-by-date marriage.

I went to see this film on the strength of the trailer which presented the most comic and light romantic moments and on that level was sold a pup. This is an often painful dissection of a common state of a thirty-something year old marriage. Streep and Jones turn in such finely tuned and truthful performances that they can reasonably expect Oscar nominations and it is those very renditions of a couple who love across a chasm of years of unexpressed emotions that makes this so poignant. Paragraphs of monologue are conveyed by a shift in the seat or a tilt of the head. It is intimately observed and compassionate. There is no villain of the piece even though Arnold is initially scornful and resistant yet still loves and values his wife and dreads ending up like his divorced work colleague, who wishes he could turn the clock back and do things differently. Within minutes we begin to feel deeply for and with Arnold and Kay, and wince at the personal questions broached by Steve Carell's patient but persistent Dr Feld, and the homework he hands out.

Tommy Lee Jones deftly plays his character who becomes increasingly sympathetic as the narrative progresses. Streep as a shy, sweet pretty but slightly frumpy lower-middle-class housewife and clothing store assistant is a far cry from the trim, chic, powerful Miranda of the The Devil Wears Prada (also directed by David Frankel) and yet she simply glows quietly in whatever part of the frame she occupies. Steve Carrel gives a kind, rock-in-the-storm performance that is almost distractingly appealing.

This is a film of its time. A generation who grew up around parents who didn't talk about 'that sort of thing' who never knew of anyone who had therapy of any kind and saw couples die embittered but still legally entwined rather than throw in the towel. Now relationships are a matter of open discussion, couples therapy happens on talk shows and self-help is just a google away. Mercifully, in thirty years time this story will make no sense except historically. Hope Springs is a lesson in the importance of communication both for those in an existing relationship and those who would like to have one.

Thirty-three years ago Streep starred in Kramer v Kramer, a ground-breaking movie about another pro-active woman in a similar situation who chooses leaving her husband and child over suicide, a shock-horror act at the time when a woman was still rated by her achievements in motherhood. Hope Springs is of a similar emotional order and I would say no more of a comedy than Kramer.

Vanessa Taylor, an old hand at scripting for TV including for Game of Thrones, wrote Hope Springs as her first screenplay for film, drawing on her divorced parents, her father's input as a psychiatrist and her own experience of therapy.

Comic highlights are positional logistics and suggestive groceries. There are no flawless bodies yet it is gently erotic as their relationship outgrows their bargain basement life to luxuriously romantic. The 5.30 audience of 20 people rattling around in screen four seemed mostly comprised of couples two of which surprisingly left during the credits which is still showing the end of the story perhaps eager to go and discuss the state of their own unions. My male movie buddy, equally misled by the most comedic moments trailer, described Hope Springs as 'melancholy' and said that left to himself he wouldn't have bothered going to see it but having done so rated it 'good'. He thought that Arnold's issue with eye-contact was not addressed satisfactorily but that the film succeeded in avoiding sentimentality.

Hope Springs is often touching, frequently vicariously embarrassing, sometimes humorous. It shows the possibility of life after the death of passion in a relationship. It is fair, it is kind and above all, it is hopeful. Even having been drawn to see it under false pretences, I have no regrets about the ticket and popcorn price and no hesitation in recommending it.