The event, although held rather late in the season, was well attended by the hand-picked distinguished guests, principally of local notables and one or two others who could be heard arriving on the helipad, and was hosted, as last year when it won the coveted 2011 Light My Fire Award, on the Keen estate.

The charming welcoming committee and security detail at the gates efficiently checked me off the VIP list and I was personally escorted up the driveway, threading our way through the impressive array of prestige cars, to the imposing gates of the mansion (see Stately Homes of England 2012). Crossing the hallway I found the event space already humming with anticipation as guests, visions in McQueen, Dolce and Armani, sipped the specially prepared beverages.

Soon we were invited into the theatre, recently constructed in the east wing, and treated to the pre-fireworks revue entitled Celebrations, by Sylvie and Aimee Productions. Aimee's stirring rendition of Happy Birthday was interrupted by a heckler (who had partaken too freely of the mulled wine) however Amy, after calling security, showed her professional credentials by going on with the show. Sylvie not only performed and directed but also coped with a demanding series of costume changes. Popular comic Eric also starred in a supporting role. 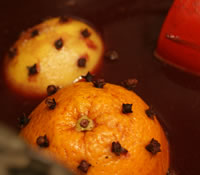 As the appreciative applause following the finale, 'Opening Ceremony', subsided, we were treated to the opening track of a well chosen playlist on the theme of fire provided by MC Les 'Spin Da Dex' providing the ideal audio accompaniment to the outstanding visual display that followed.

Pyrotechnic wizard Tony Hollohan, (pictured below with chef Jess) of Rocket To Me Events, skilfully interweaved aerial explosions with ground-level Roman candles, and the display concluded with a stunning release of stereo rockets culminating in a burst of coloured lights reaching wide across the night sky greeted by cheers and a rapturous standing ovation.

During the interlude Apple Cart Cuisine, owned by Michelin star chef Jess, delighted guests with its signature dish of chilli con carne (served on the dinner service normally on display at the V&A) followed by apples grown on the estate and baked to a turn under the watchful eye of sous chef Antonio who also created the two delicious versions of mulled wine (using a bottle purchased at auction for an eye-watering but undisclosable sum and served in hand-blown 'en plastique' goblets) which simmered invitingly and wafted a tempting bouquet out over the terrace from where the firework display was viewed.

Sparklers were then distributed with the spent ones safely cooled in a vessel exemplifying early British metalworking loaned back from the British Museum for the occasion. I had the opportunity at this point to photograph Anouk whose exquisite features adorned the cover of last month's Vogue. Among the children present were a number of Hogwarts students who demonstrated some of the safer spells and minor incantations to the muggles present. Needless to say their identities must remain secret. Eminent neurosurgeon Claire was on hand for mishaps and assured us that the person who was accidentally turned into a sundial will return to normal some time this afternoon but may find that they are obsessed with time-keeping for a couple of weeks. Regrets have been expressed for any inconvenience caused. Music's foremost legal specialist Cliff who was present said that this was not his field but any lawsuit was likely to be complicated and probably the matter was best overlooked.

Dessert was served by the bonfire of apple wood which beckoned the crowd fascinated by the writhing flames flinging sparks into the air on floating embers of light. The younger members of the party soon repaired to the formal gardens (to be restored in 2013 to the excitement of the horticultural community) and later I had the privilege of observing a hard-core training session in the Trampoline Arena.

Since its inception a few years ago, Tony has developed the event into a well-oiled machine. This is its second year on the Keen estate but the first that it has been enhanced by the theatrical feature that proved so popular with the audience. Details of the schedule and the revue were closely guarded until revealed at 6.30pm, as rival event planners are anxious to learn the secrets of the event's astonishing success.

Around 9.30 as the army of residential staff began discreetly restoring the house and grounds to their customary pristine glory, the guests began departing tired but happy, satisfied by another award-winning fireworks evening leaving the press corps to wonder how it can be topped in 2013.

More photos of the event will be released shortly.

Please report any omissions or errors to the press office