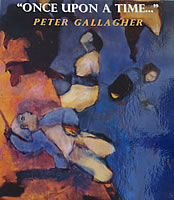 Peter's paintings are not so much character studies as character stories. They are marked not just by glowing colours but also by a remarkable tenderness and spirituality. They have been called inspired, subtle, evocative, original, beautiful, moving. Not surprisingly, canvases have been bought hot off the easel and acquired for collections as far afield as Beijing. Most collectors have 3 - 5 pieces, the largest includes 30.

Born in Ireland and growing up in Leeds, Peter's first artistic experience came at the age 13 in a school art class where he began drawing intuitively with felt pens. It was an 'electrical optical effect' and the process made the young Peter happy. Unfortunately the art teacher was less so with a student who had departed from instructions and punished rather than spotted an emerging talent. 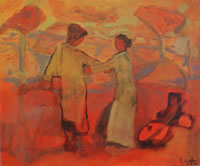 Nevertheless some ten years on, Peter was moved to experiment with some acrylics brought home by art student brother Michael, and produced a green head that even his sibling thought was quite good. Later Peter bought some oils and spent two years 'making a mess', investigating blending colours. After years of experimentation and discovery, his sought-after paintings are now a source of pleasure to exhibition viewers and collectors.

Inspired and influenced by the Expressionists, Picasso, Velazquez, Munch, Matisse and Chagall, Peter Gallagher is a natural, intuitive painter with instinctive draftsmanship. Peter explained how his paintings emerge. 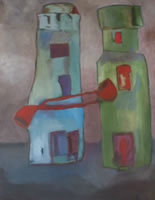 'I never know what is going to be the painting until it's finished. I start with abstract shapes and a few colours. The painting might get turned around, a dress might turn into a mountain Every brush-stroke becomes something else' until he sees the characters take shape until he is, 'looking at someone who looks back and me and saying, "I'm here" and when I've found them I know that they're real. I've discovered them. When I look at them I believe in them, like they have life in a parallel universe. They have a life within the canvas caught in the act of something. Composition is important to me. It's got an essence like characters that have soul.' 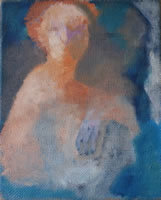 As often with novelists and playwrights, the characters in the stories of Peter's paintings allow themselves to be revealed, and then are caught in a single frame of a film of the narrative of their lives.

'In terms of story telling, there are many ways to tell it.' Peter expresses his process also as archaeology, which is reminiscent of Michelangelo's finding the form of his sculptures in the stone. 'It's a process of brushing away, getting rid of stuff, but when I find it it's like it's been there forever, like an antiquity.' Finally the title of the piece suggests itself, and is sometimes comical. Ironically the softness, the effect of oil seeping subtly into the canvas like watercolors on cartridge paper, is created by an almost savage rubbing in of layer on layer of paint. 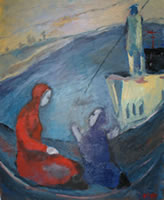 Journey to the Afterlife with its tender depiction of gently curved figures in jewel-like red and deep blue is the painting the drew me in the most because of its sense of compassion, reassurance and intimacy combined with the feeling of the swell of the water rippling to the shore of light.

'I want the viewer to forget you are looking at a painting, and you forget everything technical, about expertise. It's about passion and heart, like electrical bolts across the divide' between canvas and viewer.

'It's not a technical ability, it is something with passion and fire that you have to be able to find' and in canvas after canvas, Peter Gallagher has found it.

Although the exhibition at Lauderdale House, Waterlow Park, Highgate Hill, London N6 5HG, finishes on 20th August its other half continues at Sable d'Or Patisserie in Muswell Hill, London N10 1DE, until 6th September and you can see more of Peter's art on his website http://www.gallagherpeter.co.uk