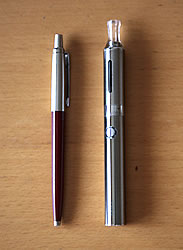 I didnt intend on that day to leave cigarettes behind me.

Back in 2006, I had the distinction of being the only person in my Quit Smoking Group who gave up on a permanent basis. Six years later I decided to join my partner in the occasional draw and before I knew it I was re-hooked.

However, my partner had also introduced me to a long-standing friend, Steve. Steve had had a health alert the previous year and decided to look at ways on cut down on his tar intake, thus discovering the delights of electronic cigarettes.

Each time we visited, Steve introduced us to various devices and e-liquids. His enthusiasm for what was developing into his new hobby sowed seeds that appeared at first to be falling on barren soil. Nevertheless Steve continued to inform and intrigue us until he nicely judged our reactions to a range of experiments and, when we were ready, made a tailor-made recommendation: the Kanger Evod. Rather than proselytising Steve suggested, Dont think of it of quitting; just as an alternative'. We duly visited his e-cig supplies site of choice, cloud9vaping, and, having selected the Kanger and a bottle each of vanilla and cherry e-liquid, pressed The Button.

E-cigs work on a battery that heats a wick that warms the e-liquid tank to create a flavoured vapour, which is inhaled through the mouthpiece. Different combinations of types of the components will create a variety of vaping experiences. The liquids come in nicotine strengths from 0 to 24 percent, and a range of tobacco and food (mainly fruit) flavours. 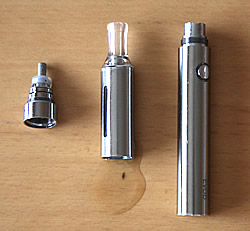 A few days after placing our order, I had barely finished my morning cig when the parcel arrived. The box includes two devices (good for couples), some spare atomisers (wick systems) and a USB charger. My partner, after his first set of drags of the day, set to assembling our new acquisitions and filling the e-liquid tanks. I pressed the button to switch on the battery and inhaled a puff of cherry mist. Pleasant. Soon the air was sweetened with fruit and spice. The Kanger is addictively tactile, and the comfort of being able to indulge in the house, the absence of smoke on our clothes and hair, ash and tobacco and an unsightly and malodourous ashtray to empty had an instant effect. Neither of us had any desire for a conventional cigarette. Later my partner did a test of his reactions to one and pronounced it disgusting.

So, that day, we quit smoking. Steve was right about something else: e-vaping is intensely involving. We were drawn immediately into researching batteries, tanks, e-liquid ingredients, mix your own, wick rebuilding and vape shops. There are at the time of writing only two in London and E-Vap in Finchley has a splendid range of products, friendly knowledgeable staff and inviting sofas to relax on while you sample devices and flavours.

Before restarting smoking Id enjoyed herbal tea but found this incompatible with cigarettes, and as I needed to drink something to counteract the mouth-drying effect and post-drag taste my intake of tea and coffee had escalated. Now I can either vape easily without liquid refreshment or enjoy my favourite peppermint or mandarin and ginger once more. 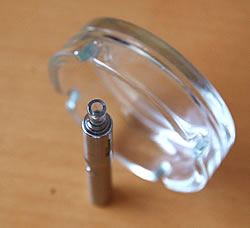 My nearest and dearest had stated frankly that I wasnt cut out to smoke. My efforts at roll-ups were pathetically misshapen and bore the aspect of recent canine attack. I dropped ash and tobacco on my clothes and surroundings and the odour of emptied ashtray dominated the kitchen bin.

Some smokers, as I did, need the ritual of assembling tobacco, paper and filter or simply of opening a packet and extracting a cigarette then lighting up. E-cigarettes supply their own rite: charging the battery, changing the atomiser, mixing liquids and filling the tank, cleaning the mouth piece, or swapping components.

Then there is the joy of viewing on line or experimenting with the possibilities: glass or plastic tanks in various hues, dragon-shaped mouth pieces, various coloured batteries and battery-holders, slim and discreet, or thick, heavy, exquisite pieces of engineering and design, and more being added by the week. It is only a matter of time before versions in gold and diamonds appear. It feels like the future. It is possible to imagine that 10 years from now analogue cigarettes will be so last century.

Is it trendy? Does it look cool? A number of celebrities clearly think so. Leonardo DiCaprio, Catherine Heigl and Dennis Quaid have found electronic cigarettes a preferable option, Charlie Sheen has started his own e-cig company and Robert Pattinson and Catherine Zeta Jones, among others, have been seen vaping in broad daylight.

Quitting smoking required zero willpower. Being able to take a full breath, taste the full flavour of food and smoke in pubs and restaurants, in the house, on the phone, at your desk is a life-enhancing change. Cloud9vaping products come with a card to let proprietors know that its harmless and legal. And no, I hold shares in neither Cloud9 nor Kangertech.

Hopefully you too have a friend like Steve who introduced us to a far more enjoyable way of life, allowed us to experiment, tempted us to try and discover a new hobby and host of health benefits and a world of ingenuity. Thank you, Steve.