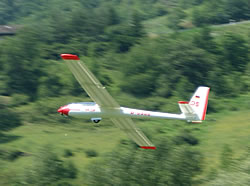 Surrounded by males, I had been bred on films such as 663 Squadron, Reach For The Sky and The Dam Busters. Living under a flight path my brother and I had spent long stretches lying on the lawn watching liners soar far above taking us far from the horrors of our lives. My new boyfriend with his passion for planes had come into my life and afforded me the pleasure both of sharing these favourite films and entry into the world of radio controlled (RC) aircraft where he had been at home since early childhood.

Whilst having my first RC experiences flying and grounding my other half's miniquads, I was navigating the world of radio controlled gliders under his guidance. I learned that gliders come in two basic flavours: wooden (mainly balsa because of its lightness) and foam, a far cry from the kits of our youth found in cereal packets and attached to magazines. The kits that is, not our youth. I hope.

Assisting my boyfriend with research, I got to know some hobby sites and supported his decision to purchase a Radian Pro which had received both hot and cold reviews. However, with an engineer's willingness to experiment he chose the Radian on which to suck it and see. Foam gliders are produced by blasting a solution into a mould, which takes a fraction of the time needed to cut out and assemble the parts of the wooden skeleton and cover the frame of a traditional plane.

Choosing a glider is no simple process. Traditional gliders have no propeller and need to be encouraged into the air by means such as being thrown skywards from high ground. Electric gliders have a motor-driven propeller for gaining height which is switched off once it's in the sky. Both are also known as sailplanes though I understand that this term is more correctly applied to the unpowered variety. 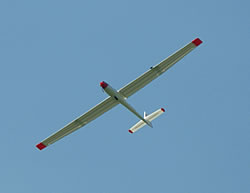 RC aircraft are available in different states, for example: the kit, which allows the owner to save on electrical equipment which he or she may already have, and have the satisfaction of construction; the Almost Ready To Fly, (ARTF) mostly assembled and with some other equipment you need in the box; and Ready To Fly (RTF), nearly everything you need in the box. Even an RTF plane must be 'bound' to the transmitter, the radio from which it is controlled, just as, for example, a universal TV remote needs to be recognised by the television with which it is to be used, or a bluetooth headset with a mobile phone. Some radio controlled models are available with a radio for first time RC users.

We awaited the delivery of the Radian Pro with impatience and on its arrival, after flight checks, took it out to the flying field. I'd seen my boyfriend fly his trainer plane, the Rainbow, an elegant orange and turquoise beauty that raced or floated around the blue, sensitively responsive to a slightest touch on the radio controls. By comparison the Radian was sluggish even to my initiate eyes but still flyable. After several flights my boyfriend with his trainer hat on, linked his Spectrum DX8 radio to his DX6, as with dual controls in cars owned by driving schools, and showed me how to attach the strap, place it around my neck and operate the throttle and direction sticks.

This was a move up from flying miniquads. Planes have flaps on the wings called ailerons, and often a rudder as well as flaps on the tail. The joints for these are operated to raise and lower the glaps or in the case of the rudder move from it from side to side, by tiny levers called servos. The servos are operated by radio signal from the transmitter in the controller. Each servo or pair of servos are assigned a channel on the radio controler. So the DX6 has 6 channels and the DX8, 8. However the principal is the same as for quads; if you want the aircraft to turn right you push the direction stick to the right and so on. In both cases the expertise comes in observing the aircraft and coordinating the power and direction controls.

In standard training procedure my significant other took the glider well up, 'three mistakes high', before passing control to me. I concentrated on keeping the wings level, the plane well in sight and over the field. Far higher up than I had ever flown the miniquads and with intoxicating elegance by comparison, my teeth-gritted concentration modulated into rapt pleasure. I understood the passion of RC pilots, the oneness with this machine with a soul and sharing with its freedom in the skies.

It was in a too-hard turn that I lost control, and failing to keep the wings level I saw it rapidly descend. My trainer took over as it passed over one of the two dead spots in the field, the soft ailerons bending unresponsively, with horrifying unpredictability the plane nosedived and cannoned into the ground, sending up white sparks of foam which settled into the grass. As we quickly walked over to examine the aftermath my trainer/boyfriend could not have been kinder, reassuring me that it was not my fault.

It was spread over a few square yards and a nearby picnicker sympathetically asked about the cost of the plane. One wing had compression and a bite taken out of an aileron, the tail fin had come off in one piece but the body of the plane was cracked like an egg and gouged into irreparability. Only the electrics and servos were undamaged.

We carried the parts back to base to examine them and my boyfriend concluded that it was good only for spares before he laid them to rest in the in the boot of the car. The suddenness and the extent of the damage were shocking, as though a swan had been shot a few yards from me. The reflection that at least it carried no crew did little to lessen vision of the shattered craft, the realisation of the cost of replacement and that lessons were over for now.

No one had been hurt. Yet something had died and before my eyes. It was only akin to the fatal flops of the miniquads. Taken aback my own reaction and unable to bear my other half's bravely veiled grief, I made my first ever round of calls to the hobbyshops he'd mentioned and poured into sympathetic ears my embarrassed and remorseful tale of the accident and my resolve to do what I could to assuage the impact. A helpful manager, after some enquiry, sourced and ordered a new fuselage, (body) and wings. My boyfriend's transformation from sadness to delight was more than ample reward. A few days later we drove to collect the parts and the glider was soon ready to fly again.

This time at least we didn't see it. Over the same treacherous spot the glider flailed and came to ground mercifully the other side of a hedge. That was it. No more Radians in particular and foam gliders in general for him. The experiment with foam was over having yielded its fatal results.

It should be mentioned here that I had one more run in with a foam glider, a desperation purchase made at the end of a last minute and ultimately failed shopping trip for what I really wanted. Flappier even than the Radian, I was able to control it only a short time and was far from pleasurable even for my boyfriend to fly. It headed for ebay with regrets from neither of us. But some have derived enjoyment from that particular glider and the plane is pictured here.

To be fair, many have fun with their foam gliders and write positively about their experiences. But these do seem to be first time flyers or those who have only had foam. These sailplane do have excellent reparability, now fixable with special superglue known as cyanoacrylate. They are opening the possibility of RC flying to non-experts or those disinclined to delve into struts, formers, adhesives, motors and electronics.

About this time I allowed the SQ1 miniquad to fall out of the sky too heavily and beyond redemption. I was as grounded as a wounded WW squadron pilot. But my attachment to my first drone was undimmed and I ordered a replacement, reading too late tales of disaster in connection with the source I had chosen.

The new Hubsan 4X miniquad arrived and I put its getting away from me down to wind and inexperience. However in the hands of my boyfriend with some 2 decades of piloting at his back it was soon revealed to be faulty. An email through Amazon was dispatched, the words of the sellers reviewers came back to haunt me as weeks later I am still awaiting a replacement or refund.

After the foam sailplane disasters, undismayed and determined to further his acquaintance with gliders, my boyfriend returned to his research and soon ordered a new glider, a 'proper' built up propellered one: The Seagull. As the order went through, little were we to know that The Seagull was to take us to unexpected heights and give us hitherto unseen perspectives.

RC Virgin Part III: The Seagull - Flying in the Alps