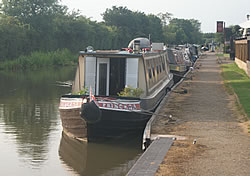 For months I'd heard tales of, seen photos of, and even had a phone call from, 'Dave's Boat', a sort of party-float, narrow boat of somewhat battered demeanour where alcohol flows as generously as the Ashby canal and rollicking cheer is the default setting. Whilst staying with friends a walk away from the good ship, word went up that a voyage may be afoot and we were at the Marina in time for our friend Steve to set the pump to bail out the engine and any other waterlogged spaces. Presently arrived the owners, Debs and Dave, and eventually we set motor for upstream. My friend Kat and I hopped onto the front of the boat where we had ringside seats for the westering sun on the hedges, hollyhocks, reeds, ducks, duckling, coots and cootlings reflecting peacefully between sounds of merriment stern-wards.

Canal boats are flat bottomed, long thin. and nowadays warm dry and comfortable. In the past a sluggish current was supplemented by ponypower as the animal walking along the towpath by water tugged the boat on the end of a rope. The path is now the province of walkers and cyclists and the pony has been replaced with the motor. Unlike road vehicles in the UK and elsewhere, boats pass each other on the right and three miles an hour can be piloted by the most inexperienced landlubber.

My first time with lock and quay, previous experience of being on the water was in early life in sailing boats. Being so still and moving so gently felt initially like being becalmed. True, cruising on the canal lacks the activity and speed of a dingy but has its own relaxing charm; not, as I discovered without its drama. Steve asked Kat and me if we'd like coffee, as a driver's alternative to gin/vodka/beer which were in plentiful, if swiftly diminishing, supply. We were mischievously invited to stand up and receive it whenever a low bridge of any kind was in view but declined and waited patiently until the briefly mediative, afternoon silence was broken by a crash, an expletive, mirth and a watery impact. We were advised that our beverages would be a little longer in coming.

Debs had made the coffee and stood the two mugs and a glass of gin and tonic on an amidships shelf which Dave, in the process of restoring, had detached from its fixings. Steve had stood on the side of the boat ready to pass the cups forward. Debs, rising, had leant on the shelf for support and it had collapsed with the three vessels emptying their contents over her and mugs shedding their handles as they loudly connected with the deck. Debs, after a natural verbal reaction and a brief inspection had consigned the now defective crockery to a watery grave with a plunk, dabbed herself down and kindly set to with the two remaining mugs on board. 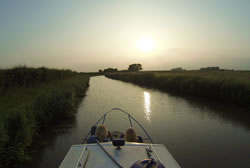 The rest of voyage passed without incident but we moored at sunset and the happily chilled Owner, Acting Captain and First Mate were clearing up the boat for the night. The AC perched on the side of the boat was helpfully handing the FM, leaning down into the cabin to converse with the owner, his mini speaker. The FM stood up and, turning, connected his elbow with AC's hand, the speaker detached from the wire by which it was being held and plummeted under force of gravity into the canal to join the handleless mugs and left the AC in unhelpful possession of the cable, all providing an example of the perils of life aboard. The thick, noxious, green gravy of the canal prohibits retrieval and discourages contact of any kind without prior vaccinations.

The final incident happened ashore during a final quick dash to Ladies by Debs and me as the others headed out to the vehicle. The Marina had shut up shop and the chairs in the restaurant had been loaded onto the tables but the side door to the facilities was still open. We made haste. Having emerged from our cubicles Debs's phone rang with a call from one of our waiting friends and urged me to exit with all possible speed only to find that the door was locked. I assumed that the staff had considered the area empty and turned the key on it. I rattled the door energetically hoping we'd be heard and liberated. 'We're locked in!' I announced frantically to Debs. She looked unmoved and with a wry gesture directed my attention to the door behind me. I'd been trying to break into the cleaning cupboard. Giggling helplessly we stumbled towards the car park and brought a day of hilarity and pleasure boating into harbour.